Also some tips on driving, concentration or attention 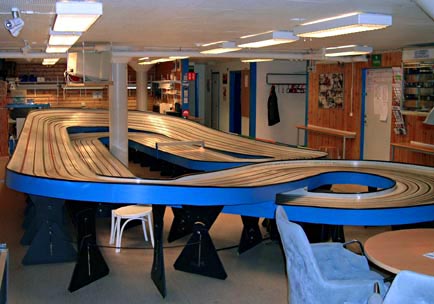 This is our club-track. It's 37 meters and 15 centimeters long in the orange lane. The fastest pole time is 3,723 seconds for Saloon cars taken by Olle Söderholm, and that gives the that Saloon car a average speed of 35,9 km/hour or almost precisely 10 meters/second.

To understand the very hard competition at our club, I can mention that to win a race, you need to run an average of 252 laps in the final over 18 minutes (taken as an average over the whole season of 2004). That is an average lap time of 4,286 seconds. The record is an nearly impossible 260,7 laps – taken by our Champion Lars Åberg – with an average lap time of 4,143 seconds. You know that there are many people at the club that has not even gone under 4,1 seconds in the qualifications ... 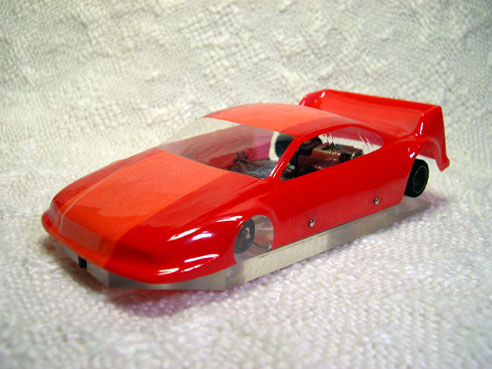 This is one of the cars that I won a pole with, of the five I took in 2004. I turned a 3,872 time
which is quite fast on our track. I like very much to have a grippy car, as sideways sliding looks
nice, but costs too much time. Compare this idea with the big real life classes like Formula 1. It's
very unlikely to see a Formula 1 car that slides sideways for any prolonged period, usually it can be
seen only when the driver have done a mistake.

This is the car that I took my fasted pole time with. It was a 3,825 time. I used a bit a lead-weights
then, but after a lot of experimenting, I have removed them. It's better I think, to adjust the grip
with the back tires, if only the front end will bite securely in the corners.

This text is aimed at the less experienced driver. Those that have a developed skill, may find this text superfluous.

Many basic things are of course in the whole setup of the car. But to learn to drive a particular car is a long effort, as it's to learn anything at a high level of expertise. After the first basic months of trying, one can get a hang of the technique. Mainly its concerns to always keep the car floating with an even speed; not to make sudden moves that makes the car jump around, go too much sideways or lose speed in acceleration by fish-tailing. A slower but smother driver – one that doesn't overdrive the car – usually wins over the "power-hungry" person, that is too hot on the gas and the brake.

Newcomers always brake to much – or in two or more periods – and/or apply gas in a pumping motion. This is a mistake! Brake and gas should be applied in a straightforward way. No pumping of the controller. If you do this, you have misjudged your braking or acceleration points.

Too much sideways traveling could look cool at the track, but it's slower. Notice also that the car should be set up so it can be able to save you from an accident, if you would go too quick into a corner. A correct gearing and balance of the car, should able you – up to an certain limit of course – to power yourself out of problems.

The really fast driving can possibly be described as a form of weight shifting. You have to balance the car into the corner and then push the weight backwards on acceleration. I turn the gas on even before the corner starts (!). That is if I have a correctly adjusted car for that type of driving ... This technique can only function if you have performed the correct weight shift, to let the car's front end bite into the corner, and then catch the rear end with the gas – which you must do before the corner – spinning the wheels just enough to let you go around the corner without too much sideways traveling. A lot of practice is necessary to be able to do this consistently and smoothly, lap after lap.

One of the most important factors in fast driving is the ability to absolutely concentrate on what you are doing. One has to constantly practice this over and over again. The more you can achieve of concentration, the more your driving will improve. I will on the pages on music listening, talk more on this subject; the difference between concentration and attention, the division of the mind.

Remember that it's not really possible to be a "true" racer if you think that racing is something casual and just for entertainment. It may sound strange, but it will actually mean more for you and will be the "entertainment" you asked for, when you focus strongly and give your driving your absolute best. As you feel that you are not developing something, you will find that what you are doing is becoming more and more boring to you. You always have to seek to improve something, to actually enjoy in the long run what you are doing! This is the reason why the so called "entertaining attitude" in no way can be something that's fulfilling in life. Therefore "the entertainment view of life" is just a dead end, as it will only in the best case, slowly develop you. So leave the "entertaining attitude" somewhere far away, start to develop really anything that comes into your mind, and build from there. Remember that these facts are the same in anything you will undertake. To be a true listener or musician, doctor or computer-programmer, demands the same attitude.

More on this subject on the pages of concentrated listening ...

Due to lack of interest among the club members, the races has expired. The last race in the Saloon class took place the 21st of March 2006. (To be fair, there was one single race with Saloon-cars later on with drivers from south of Sweden).

The track has been rebuilt to a flat version with a small jump (!), to fit model cars and their slower speed around the track.

I have no interest at all to drive model cars, as they are much too slow for my taste. These type of cars move more on detail; they model real life cars as the name implies. Due to their heaviness with an elaborate body and heavy chassi, they cannot have strong motors or grippy tires. A crash with a model car in high speed, would completely destroy it as of their weight. The Saloon cars are much lighter, with stronger motors and grippy tires, and therefore much faster. They can take quite a lot of hard hitting cashes as of their lighter weight.

This development is in my view very sad. I do hope another track will open for us who prefer faster racing cars.