This concert Hall in Sollentuna was planned, but never built. The concert Hall is in the centre; around the hall is a Hotel to the right and office complex to the left. The late 1992 bank crises in Sweden forced this project – as well as many others – to be abandoned. 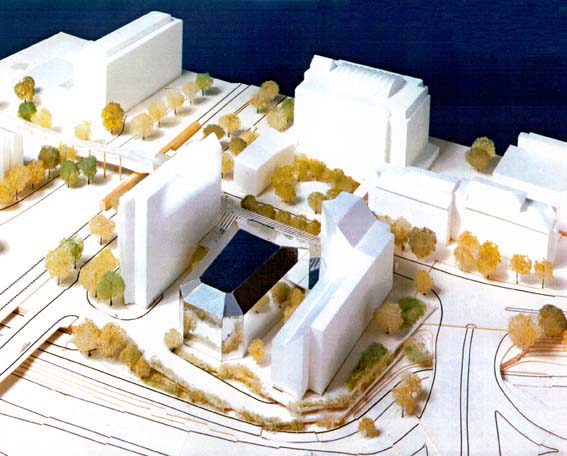 You can see in the background the Star Hotel, the railroad and some other buildings that are part of today's Sollentuna Center. Unfortunately, today there are at this location a lot of dull looking apartment buildings and even worse, the mall has increased to twice is former size!

No concert house of this size will probably ever be built in Sollentuna ... and so the professional concert life in Sollentuna, has formally and sadly died forever.

I worked as a consultant of acoustics and practical solutions for this hall during 1987 – 1993. I worked for the Sollentuna community. This was complex planning as rather diverse interests were involved: The Sollentuna community, the Sollentuna Fair, Star Hotel, and the building company JM Bygg AB. An architectural competition took place and the same man that had drawn the Berwald Hall – Erik Ahnborg – was finally contracted. As the main responsible acoustician, we got the excellent Norwegian Svein Ström. The "special committee" travelled around Nordic countries and looked at different halls. My responsibility was to assure quality control and to make the hall a concert venue, preventing it from becoming yet another show hall featuring music piped over speakers. It's a fact that it's easy to take away sound in a hall by rather simple arrangements. But, to add sound to a hall that is too dry is nearly impossible to do, especially if high quality is kept in mind.

One has to understand that there has been a tradition in Sweden of badly formed halls. We call them "Folkets Hus", and they are halls that really are not good for anything at all. The second thing to understand is that halls intended for music-making and those intended for theatre or speaking make completely demands as pertains their design and construction. I'm afraid to say that in my experience, the building of halls for music-making has not been a priority and even those that were initially intended as concert venues end up as uncomplicated and inadequate sound environments for use in theatre work or speech-giving. There are too many halls around that I can cite as examples of this problem. Here's a case that took place in a town – I won't mention the town's name – where the politicians decided to build a new hall. But, due to a bad building agenda and preplanning, a hall good mostly for theatrical works was built. Everyone I talked to in this particular town was dissatisfied with the sound of the hall. I even heard a concert, sitting next to the responsible acoustician and told him that I could not hear the contra-basses the whole evening through! Subsequent measurements confirmed my subjective reactions. Indeed, although the town theatre actually stood on the opposite side of the road (hence, there was no need for another such hall) politics and poor planning resulted in the erection of a hall altogether different from the one originally planned: and another town theatre was born!

The hall in Sollentuna was going to be almost exactly as large as the Concert House in Gothenburg, but with a bigger stage. The hall would easily have had the best acoustics of the two other concert halls in Stockholm. As you can see from the information on the former page, the sound quality of these halls would not be difficult to improve upon. 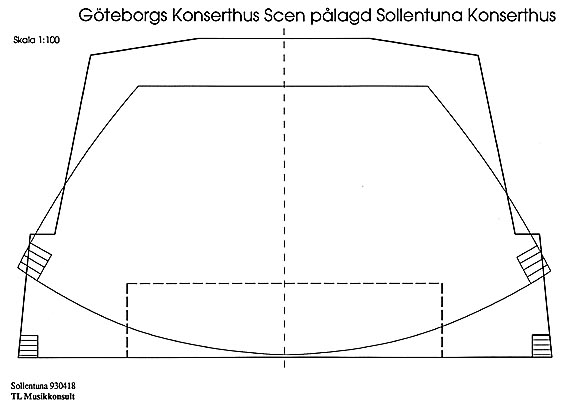 These are some drawings I made with my old Amiga 3000 and Professional Draw. Today this combination seems "stone-age", but the Amiga was, in its time, a very good computer. 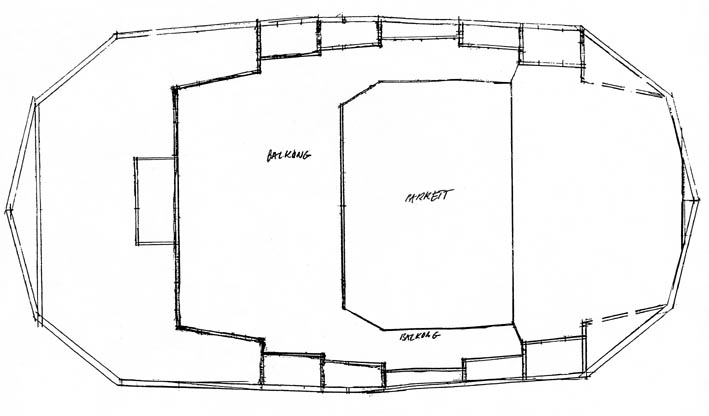 The shape of the hall was not quite finished. We (myself and Svein Ström) had serious questions regarding how the form of the side walls could yield better lateral reflections.

Many halls today are too wide to give good lateral reflections – in my view, the most overlooked area of sound quality. 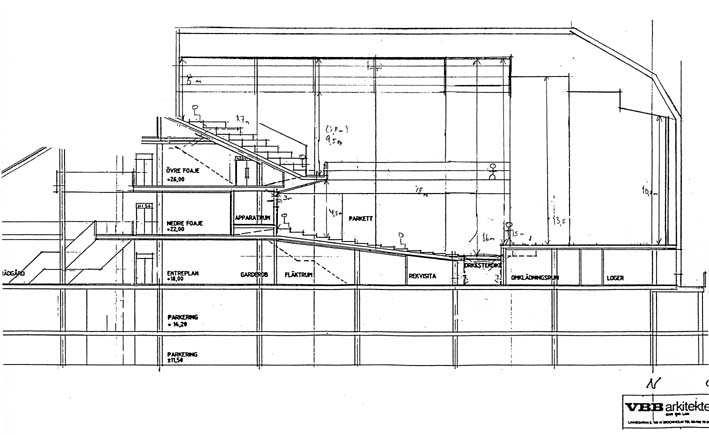 A sideways cut with some simple drawing ideas, to break up the side wall.

Another idea was to have two sections for the audience. If you would close the upper part and dampen the lighting there, you could still use the whole volume for smaller concerts or shows, and at the same time you would not feel completely lost. A big hall for 1.000 people will appear empty if only 300 are present!

This idea would make the back part of the hall a bit worse acoustically, but it was a calculated throw-back to gain something else.

Many halls are built today with a very steep parquet at the first floor to gain visibility. But, on the other hand, you will lose volume that is very important for late reflexes and also increase the damping area of the audience. Remember that all good halls in the world do not have a steep parquet.

Given my experience, I can mention the two most common "mistakes" when building new concert halls:

1. Halls that are too wide and which have bad lateral and first reflections (very problematic).

2. Too steep an angle for the first parquet.

If only these two aspects would be considered in any planning, I believe that both audiences and the musicians would be much happier with their new halls.