One of the truly great Russian artists, Vladimir Ovchinnikov played for us in 1999. His Liszt Dante Sonata was the very best performance of that piece I have ever heard, and I've heard quite a few versions ...

Vladimir is the winner of both the Tchaikovsky and Leeds competitions – two of the four greatest competitions in the world.

And that was apparently not enough to entice the local press! Would they have treated an Gold medallist from the Olympics appearing in Sollentuna in the same manner? You may now begin to understand the degree of difficulty in arranging serious concerts due to this kind of resistance and complete lack of interest or understanding in Sweden. 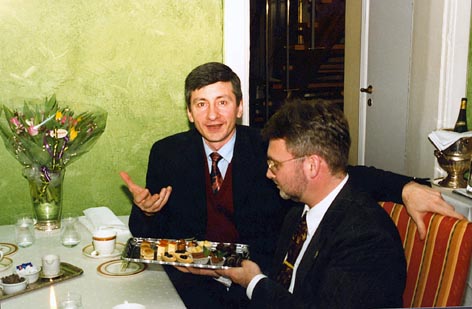 Vladimir is a very experienced player. Right before his concert, I asked if he had played in America. He murmured something about New York. When pressed on the issue, he told me that he had played in Carnegie Hall three times; twice with Svetlanov and the Russian State Orchestra and once with a piano recital. Amazing! You can still find his EMI complete Prokofiev Sonatas on the web. In Sollentuna he played the large-scale Second Sonata by this composer and the audience loved it!

The picture is taken at Edsbacka krog – the only restaurant in Sweden with two stars (listed in the restaurant guide formerly known as ”Guide Michelin”). They were our sponsors for some years. Vladimir was also scheduled to play the following year, but Visa problems got in the way. It goes without saying that if the series had continued Vladimir would have returned for more recitals. 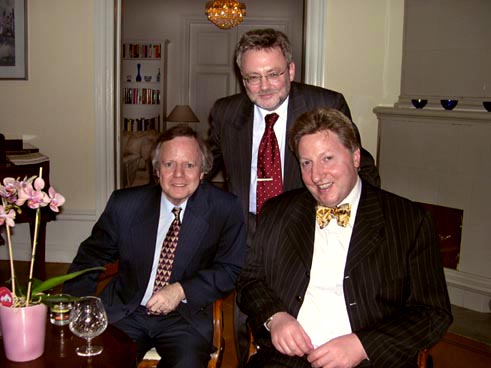 This is a picture from 2004; a dinner reception with the Australian ambassador Richard Rowe, myself and Leslie Howard at the Australian Embassy's residence in Stockholm. After dinner Leslie played a remarkable informal concert for us all. 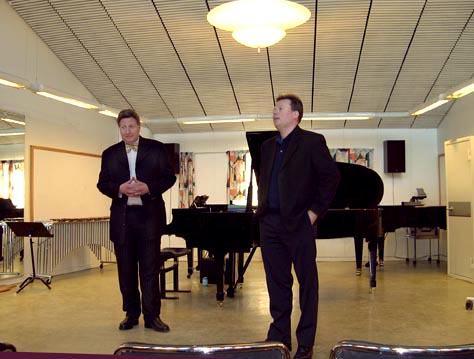 Leslie lectured at the Conservatory in Stockholm and held a master class for the students at his last visit. Here he is with professor Mats Widlund, also an "Amorina artist". I have arranged these collaborations with the Conservatory many times, since it gives the Conservatory students a chance to meet and learn from artists otherwise seldom invited to Sweden. And since our fees, though high in comparison with independently produced series, were less than usual for an international artist, these lecture fees were something of an added bonus for the artist.

Can you imagine my surprise when the local cultural office in Sollentuna announced a concert with a – in my opinion – guitarist of doubtful quality. Moreover, the artist was also to give a "master class" at the local music school in Sollentuna. "Hubris" is the word for such stupidity. Words lose their meaning if they are misused to describe something which cannot attain the level inherent in a word of phrase. "Master class" is for masters of their instrument! You will find them at the small solo classes at the Conservatory, not in a local music school, where most of the teachers haven’t even studied at a solo class themselves! But, remember, to even discuss these matters openly is a very dangerous thought in Sweden. The general consensus is that no one is better than anyone else, especially when music is concerned ... 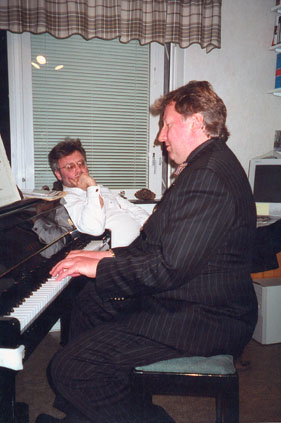 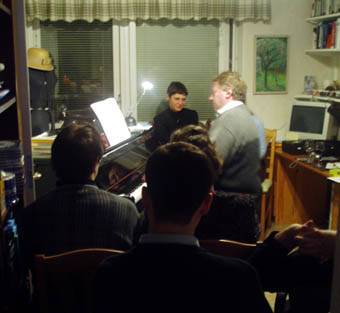 These two pictures are from two different years, 2002 and 2004. Leslie Howard is, as most other artists, very interested in playing and talking about music for its own sake. He will sit for hours discussing and performing for you. The photos were actually taken right after the main concerts and a dinner. We kept on for many hours, well into the night. Leslie has a fabulous ear, and we challenged him to remember individual parts from symphonies. After a few seconds of thought he presented a fully fleshed out piano version of that particular work – astonishing to say the least!

But, one should also remember that Leslie is one of the pianists who has recorded most CD's in the world. His complete Liszt edition of 97 CD's includes 300+ world premieres, including works prepared by Dr. Howard from Liszt’s still-unpublished manuscripts and works not played since Liszt’s lifetime. This monumental project earned Dr. Howard’s entry into the Guinness Book of World Records, 6 Grand Prix du Disque and numerous other awards. His total discography adds up to 130 published recordings. A very difficult record to beat. The Liszt edition consists of 117 hours of music and more than 16.000 pages of music. Just imagine the mental capacity to read through that pile of music only once. Gentlemen, lift your hat and sit down and quietly listen to this exceptional artist!

The outstanding English pianist Steven Osborne gave a very "interesting" or should I say unusual
performance of “An der schönen blauen Donau” at his concert in 2001.

The pictures taken by Henrik Hovmöller, the president of the Amorina Recital society
need no further comment. 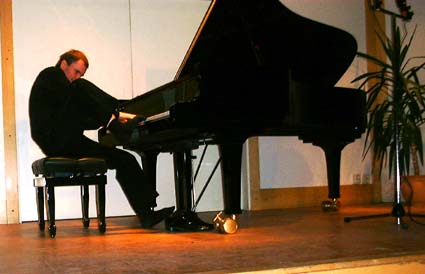 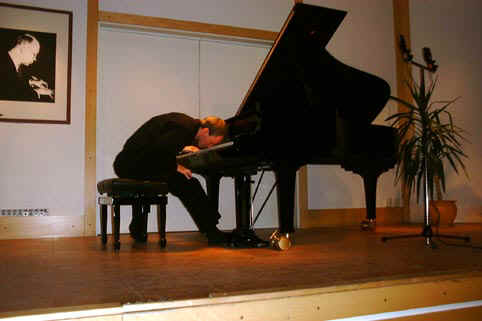 Please, do not jump to conclusions. Steven’s recital contained all the aspects of a first-class concert.
This spectacular encore was just another facet of this truly talented artist. Who said that classical concerts where boring? 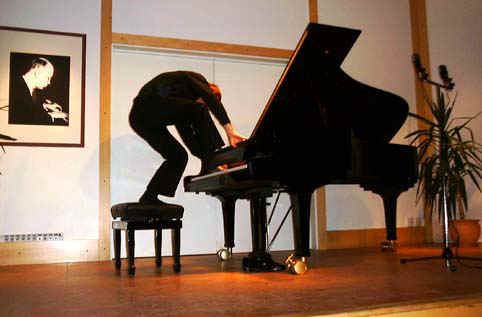 A Photoshop experiment with three pictures and text.
Just for fun! 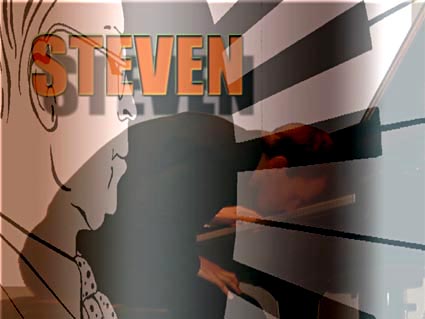 The American pianist Michael Habermann visited us in 1998 and stunned the audience with his playing of the enormously difficult music of Kaikhosru Shapurji Sorabji. The music is nearly un-playable and Sorabji actually took great pains to forbid any public performance not up to his extreme high standards. This meant that Sorabji’s music wasn’t heard in concert between the 1930’s and late 1970’s. He lifted his ban for Michael. Michael plays by heart, and after I had a quick and frightened look at the score, his feat became even more impressive. This was Michael's first visit to Sweden. He also gave a lecture at the Conservatory in Stockholm. 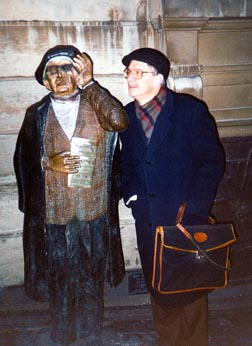 Why Swedish Radio didn’t record this very exceptional recital among all others is a mystery beyond any reasonable explanation. The programme was completely unique and indeed contained several world premieres. Several persons from the Radio were present in the hall, but nothing was done to make this sensational musical experience available for a larger audience. The record company BIS has shown much better understanding of what is worth preserving and has released Michael’s studio recording of the Sorabji works at this concert on BIS-CD-1306. 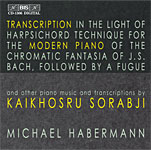 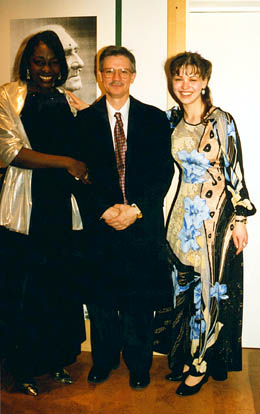 A happy trio: Claudette and Michael Habermann together with my wife Tanja!
Liszt oversees everything from the back of the hall.