The great Canadian pianist Janina Fialkowska was an Amorina recital artist in 1998, playing in a over-booked hall. She was scheduled to return in 2002, performing all of Liszt's Transcendental Studies in one recital. Unfortunately she got seriously ill and had to cancel. 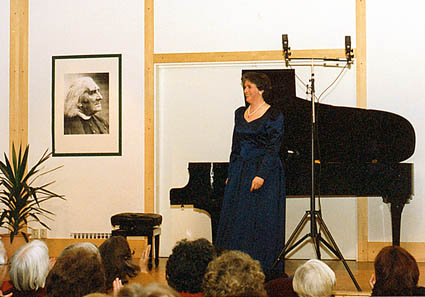 Janina won the first Arthur Rubinstein competition and has played with major orchestras such as: Chicago, Cleveland, Los Angeles and Pittsburgh as well as all the leading Canadian Orchestras. In Europe she has played with the Concertgebouw, London Philharmonic, Royal Philharmonic – the list just goes on and on ... She was for a short while a professor at Juilliard School of Music in New York, but cancelled her teaching career to devote herself to her playing.

Listen to her recording of the two Chopin Sonatas on Opening Day Records ODR 9318. The recorded piano sound is one of the best that I've ever heard – moreover it's very well played. Remember that I have a unusual and extensive knowledge of recording acoustic instruments, as can be seen on many pages on this site. I think I can utter this with confidence.

During her visit she gave a lecture at the Stockholm Conservatory.

Here is the entry to the hall showcasing another sold out concert. 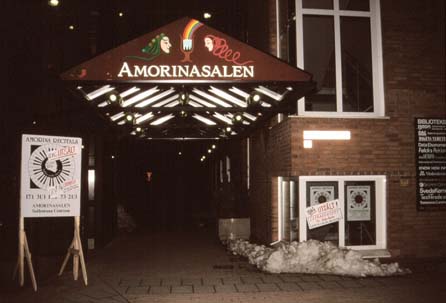 This picture below shows the construction of the hall in April 1983. The picture is taken through a net,
but you can still see the basic shape of the hall. After the hall was built, it took another
two years to improve the poor acoustics. You can read some about these problems
on the pages devoted to acoustic and my personal section on this site. 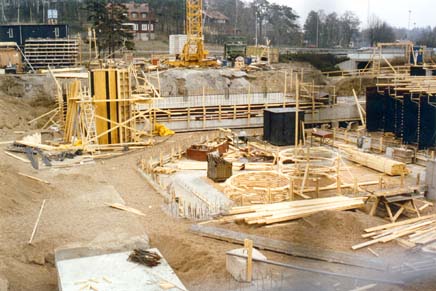 In this picture from Gothenburg in March 1984, you can see me looking for an instrument for the Amorina Hall. I’m testing a Grand Yamaha piano, one of two pianos we chose. During all these years and concerts, the piano has really performed well. But I have made several adjustments to the level and depth of the keys – as well as made extensive adjustments to the mechanics – all aimed at making the action more sensitive and much quicker in key-response to the pianist's playing. 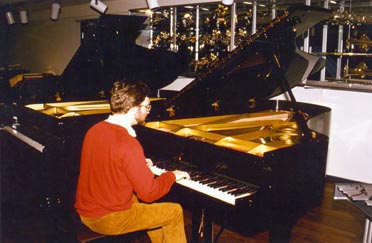 There are many ways to change the response from an instrument. Many artists are quite surprised to find how much it really can change. But, it must be noted, this surprise is usually brought on by the fact that most instruments have never received any service at all or that the adjustments are not done properly. An instrument leaving the factory arrives in a more or less “rough” condition. There is much work to be done to improve the sound and response of the action.

The Yamaha is a bit more susceptible to hard hammers than a Steinway. Over the years, it tends to sound hard and shrill if it's not properly serviced. After more than 5.000 hours spent on tuning and adjusting instruments, I’ve come to the conclusion that a Steinway is more reliable insofar as wear and bad treatment is concerned. But again, the stability of tuning is usually better in a Yamaha than in a Steinway. More on tuning and piano actions, history etc., in the tuning and piano pages.

With proper care and careful tuning and voicing before every concert, I had full confidence in the instrument functioning without problems. Many artists told me that it was the best Yamaha they ever played on. Then again, they might just have been nice to me ...

We have measured the sound level in the hall at a concert with Piers Lane, and it measured at an amazing 110 dB at 2 meters from the piano! This equals the sound pressure created by a full symphony orchestra ...

This is Piers Lane, a truly wonderful English pianist. He has played for us three times, and has become a real favorite of the public. Listen to his Balakirev Islamey on EMI CDM 7 64802-2. It's one of the very best versions ever recorded! 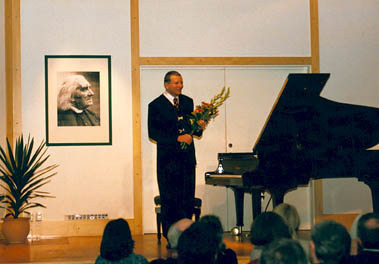 I remember the first time Piers came in 1998 playing among other things the Liszt Sonata. He wanted to exchange the Scriabin Preludes op.11 for Stravinsky’s Petrouchka suite. It was an improvised change, as Piers wanted to play something Russian for my Russian wife. As I was in the hall all the time Piers was practising, I know that he tried the piece only once. The brilliant concert was taped live by the Swedish Radio! You need a very high level of playing to be able to do this kind of sudden swap with this very difficult repertoire. Some years later on, Piers came back and played the Scriabin Preludes which is seldom heard as a cycle here in Sweden. He has also recorded this repertoire together with many other things for the Hyperion label.

Piers has fantastic sight-reading skills, and a very broad knowledge of piano music. For five years he had at BBC Radio 3, a popular 54-part series, presenting "The Piano". During his first visit he gave a lecture at the Stockholm Conservatory. 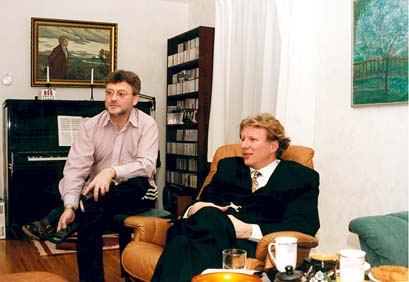 Here is Piers sitting listening to some of my "rare" recordings. As I’ve mentioned before, one of the ideas of Amorina Recitals was to present both standard repertoire and less familiar works. This decision made the choice of pianists much more narrow. Too many pianists – even those with a big career– decide to learn only one recital programme and a few concertos each years. Unfortunately, the major recording companies seem to follow this narrow track. To record the Tjajkovsky B minor concert again is quite unnecessary. The world doesn't need another recording of that piece! 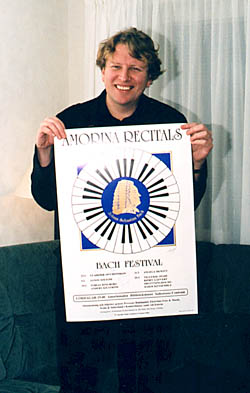 I often suggested changes to the programmes to give the audience a wider view of the extensive piano repertoire. This is very important today, at a time when most promoters around the world continue to propagate "Chopin G minor Ballade" kind of recitals. This is nothing but lack of inspiration and the fear to take artistic risks, and I cannot understand why this kind of programme still attracts the interest of any audience. Maybe it's because so few people are really interested in and more importantly have any knowledge about repertoire outside the standard canon. This is unfortunately true for many students at the Conservatory. Too often I have been surprised by how little students today know about music, other pianists or even musicians from past generations. It’s also striking that so few of the students have played through all the Beethoven sonatas, even if it be just for the simple reason of getting to know these works personally.

Hyperion Records, one the most important independent labels in the world,
has a site at which you’ll find information about Piers’s recordings of often rare works: 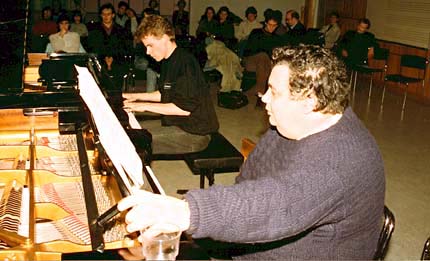 This is Roberto Szidon. Perhaps you saw his name mentioned among the pages covering my own concerts. Roberto was my most important teacher and musical mentor. And of course, in 1990 Roberto was the very first international artists to visit Amorina. To finance the whole thing, I arranged for the first time a collaboration with the Conservatory of Stockholm – a master class and a lecture.

Down there is a picture from the master class in 1990. The professor of piano at the Conservatory at that time was Laszlo Simon, also an "Amorina artist". You can see him in the background to the far right in the picture. The lecture was given at Edsberg, my former school and nowadays a part of the Conservatory. 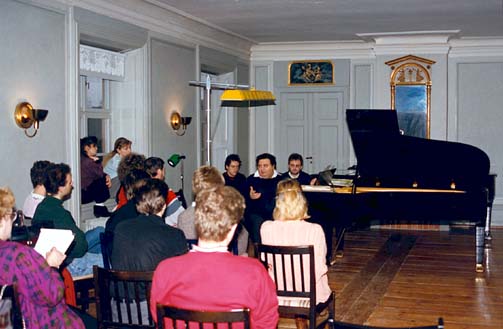 Roberto played a brilliant concert with rare works, such as Medtner’s 2:nd Sonata, Rachmaninov’s 2:nd Sonata in the rarely heard early version and Villa-Lobos Rudepoema. The foundation of Amorina Hall shook when confronted by the brutal force of this last piece.

Roberto is also a doctor in medicine and surely has the most incredible "prima vista" ability of any pianist, dead or alive. He is able to play almost anything from first sight. I tried to interest the local TV-channel in this rare visit, but they showed no interest at all. At the end of the program, there is usually a segment devoted to local events. Even today, I clearly remember what they aired instead of Roberto: some ducks escorted by the help of a policeman over some road! What is there to say but quack, quack ...

The English pianist Stephen Coombs played the last concert in 2002. He performed rare music by Glazunov, Liadov and Massenet. We also listened to Schumann's Carnaval and Scriabin's very first Piano Sonata, composed when Scriabin was only 14 years old. This was probably the Swedish premiere for several of these works. 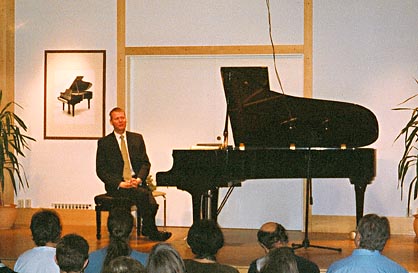 Stephen and I discussed a collaboration between a concert series he produced in London, and two other series in Spain and Germany. This would give a pianist or a chamber music ensemble, an opportunity to play the same programme at least four times and also to make Sweden a bit less obscure when chamber music and recitals are concerned. I went happily to the community to convey these ideas. Not surprisingly, I got no reaction at all.

Later on I learned that some of the politicians and some officials from the Sollentuna community together with the former (female) headmaster of the Conservatory in Stockholm, went to Italy wasting the taxpayers’ money. The goal was to – you better believe it – start a collaboration with (?) Florence and Rome. For anyone knowledgeable in the classical music sphere, these are not the places to start such a project.

But, perhaps I'm expecting too much from the community. When Stephen Coombs' name came up, one official at the community working at the cultural department, happily asked if Stephen was "her music teacher from Junior High School?" With that non-existent knowledge and interest in the classical music field, a meaningless trip to Italy might not sound as such a strange thing to do ... Another example of this kind of music illiteracy came from another employee at the local cultural department: when Beethoven's Piano Sonata "Les Adieux" was performed, the only comment from that person was to question the value of this kind of "silent movie music". As the reader now probably understands, it was impossible for me to use the Cultural Office for matters other than purely economic transactions. To co-operate in any other way, to deal with this complete absence of knowledge, indifference but also bad manners, is of course impossible.