The construction of the piano and its regulation, page 5

Shaping the hammers and voicing 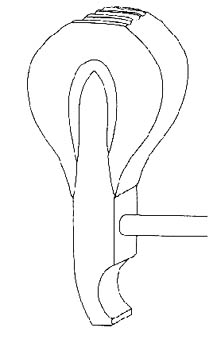 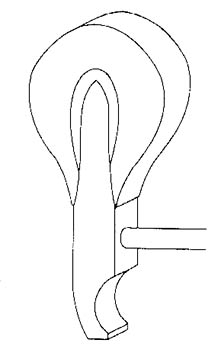 When the piano is played, the hammer felt compacts and eventually develops grooves, causing a harsh uneven tone. This is the single most problematic aspect when dealing with instruments in concert halls or in churches. The piano is played a lot and is (hopefully) tuned over the years, but it very seldom gets any other service. Properly sanding the hammer to the correct shape often makes a world of a difference in the sound of an often-used piano. So remember this: a properly shaped set of hammers is really one of the most important things in a piano! 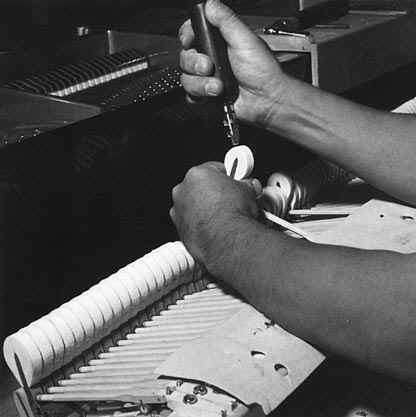 The hammers have to be voiced – after the piano has been tuned and the action has been properly adjusted – to give an even sound over the whole range of the keyboard. This is important to check both with and without the left pedal. 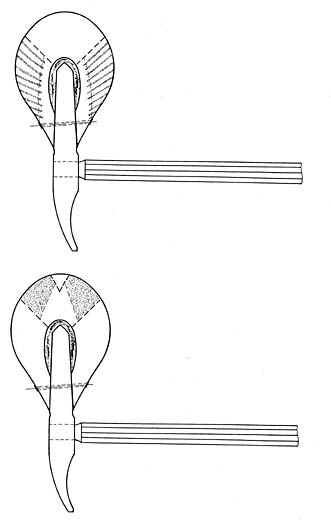 Voicing is a very delicate affair and should only be performed by an experienced piano technician with a sensitive ear. It is often my experience that the voicing is overdone, which in turn results in a dull and unvaried sound.

The illustration on the right illustrates that you voice in the lower area of the hammer for the bass notes, and in the upper area for the harmonics of the tone. Never touch the top of the hammer.

The regulation of the mechanics 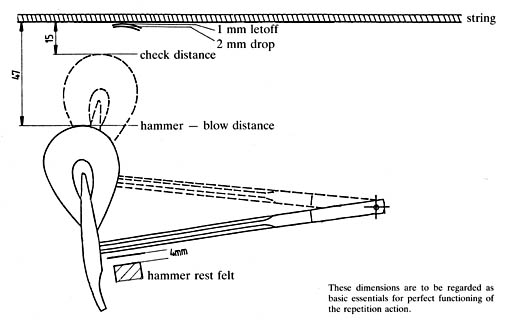 Some basic adjustments must be performed. In a "raw" instrument coming directly from the factory, the let-off and the drop is usually set quite a bit from the strings. This will make it difficult to play softly on the piano and you will feel that the instrument responds sluggishly to your fingers. Too deep a drop makes the instrument slower and renders a "spongy" character.

The basic settings can easily be checked.

After sanding the hammers, start with the hammer blow distance, then the let-off and finally the drop. Usually the check distance doesn't need to be changed; this requires a much more steady and careful hand.

Remember that the depth of the keys, the hammer blow distance and few other settings are a bit different on a small instrument and on a concert grand. But, usually these variations are smaller than those which appear when comparing both of these instruments with the normal raw instrument that hasn't had any service at all besides tuning. If in doubt, do nothing on your own!

I want to stress that the proper set-up of the keys and of the key-frame is one of the most important factors in achieving a satisfactory working instrument. Often, instruments by the same manufacturer are quite different from each other, even if they are the same model. But, I have never found any instrument that could not be improved in this way.

One of the most vexing situations is discovering that the black keys are too high. When playing chords, you want be able to play them with the tones sounding together. To play fast and even chromatic scales is also difficult. On the opposite side of the spectrum, black keys positioned too low are problematical and make mastery of the instrument difficult. Touch set too deep will make the instrument slower, and if it’s too shallow it will be especially difficult to control dynamics.

Actually, there are many adjustments to be made in the action, settings that will in a profound way change the way your piano responds. But remember, if the basic settings above are in order, you probably have quite a good instrument to play on. In this short introduction, I haven't mentioned all things a complete setting of the action will include. 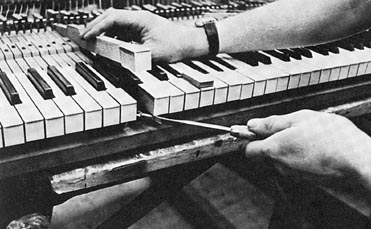 Particular adjustments that should be mentioned are those that were made to the personal instruments of Glenn Gould and Vladimir Horowitz: the depth of the keys was decreased in order to make the keys travel a shorter distance, which in turn resulted in a gain of speed in the instrument.

Again a warning is appropriate: to change the heights of the keys or the depth of touch without knowing what will happen with other settings in the piano will probably lead to a minor disaster with your instrument. Perhaps you have heard the famous and wonderfully recorded Bach Inventions and Sinfonias by Glenn Gould? In this record you can hear the result of the hammers rebounding severely — the consequence of Gould's excessive key-touch adjustment.

When the depth of touch is too small, the jack has a tendency to get stuck under the hammer butt, not allowing it and the hammer to escape freely. There are some ways to remedy the situation if the jack gets stuck under the hammer butt, but it would take a lot of space to explain. In a properly set piano the hammer always should rebound – if hit with some force – into the back-check, without having contact with the key through the jack. (In all cases the hammer should be released from the key after a note is sounding). This is the true reason why the action is called an escape action!

Some more pictures of pianos that you have probably never seen: 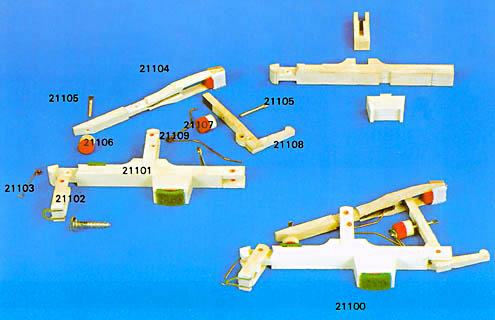 The parts that make up one of the 88 mechanics. One for each key. 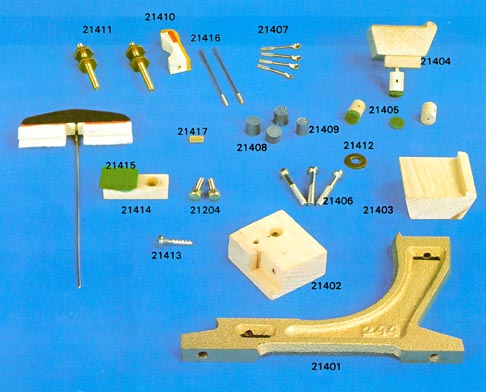 And with these parts you build a complete action. 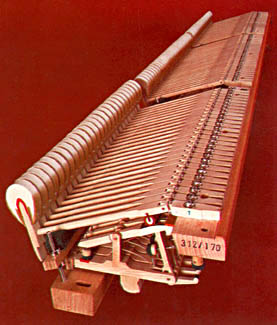 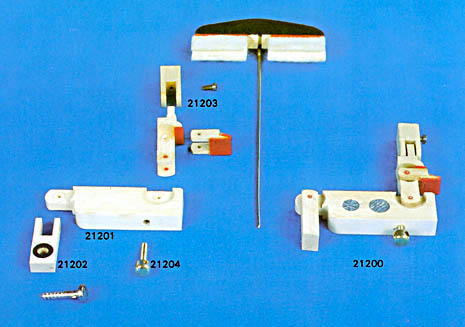 Parts to build one of the dampers. 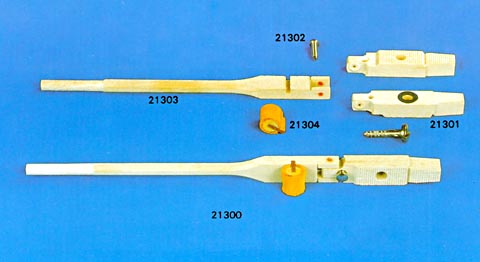 Parts for building the hammer-shaft.

The hammers can be bought in many different sizes and qualities.
They are compressed one set at a time in big machines like these. 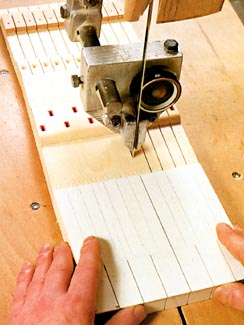 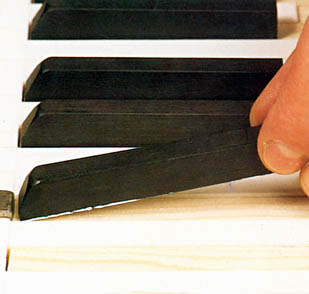 Here the keys are made, and the black keys are glued on. 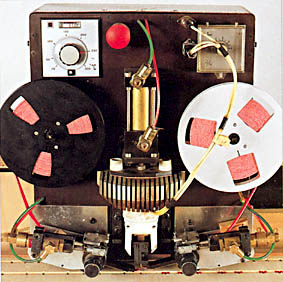 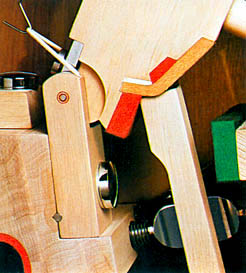 To conclude we have a close-up of an upright piano action.

On my lectures page, you will find photos of some rare pianos.