This is a recording session of the songs of the Swedish composer Bo Linde in July 2008. Susann Végh, a soloist from the Royal Opera, sang together with Johan Westre at the piano. 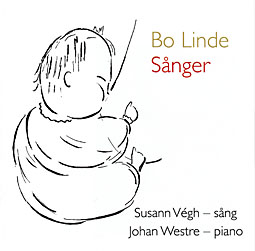 You can buy the CD from Lovestream records at: www.lovestreamrecords.se.

Notice how the mikes are placed! The main mikes are for the singer and she sings between the mikes to avoid puff sounds – from letters like p and t – and strong s-sounds. You do not need to master the recording after the session with limiters or de-essers, because these sounds are no longer present in the recording.

The piano will also have its bass recorded through the main mikes. As the mikes are omni-directional, they will pick up especially the bass without any loss, even at an angle. 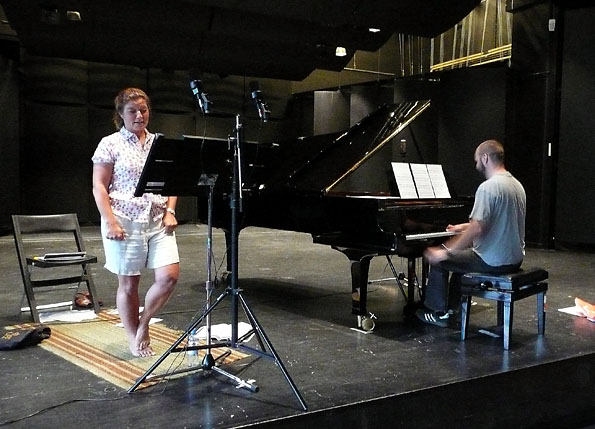 There is a third mike that will give presence and detail to the piano sound.
And the piano lid can be completely open to get a better sound from the piano. 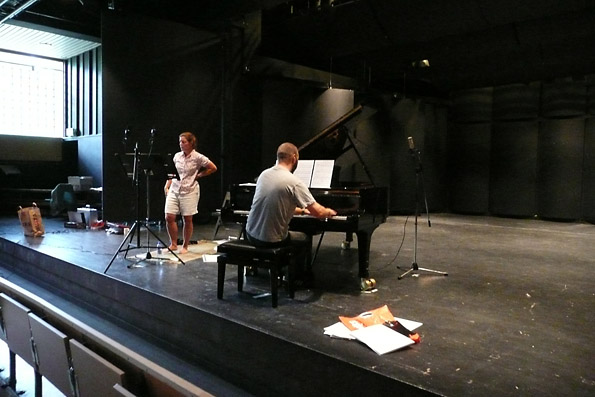 This is from the recording sessions of pianist and composer Stefan Lindgren's
Piano Sonata number 6 at the Swedish Radio Studio 3 in November 2007. 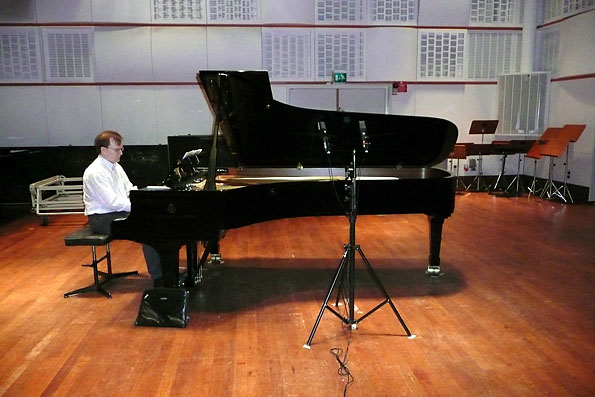 Pianist Bengt Forsberg was the producer. 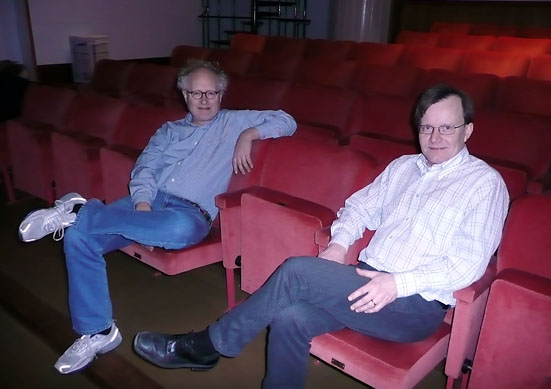 And from the session held at the chamber music hall of
the University College of Opera in Stockholm in April 2009, recording the pianist
and composer Stefan Lindgren's Piano Sonata number 3 to 5. 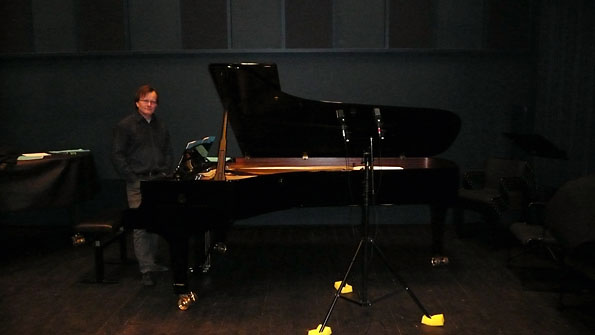 It's important to really physically measure where they mikes should be placed at the piano.
Otherwise it's not possible to get an uniform sound picture between different days of recording or even halls.

These pictures are from two halls, the Swedish Radio studio 3 and The University College of Opera. 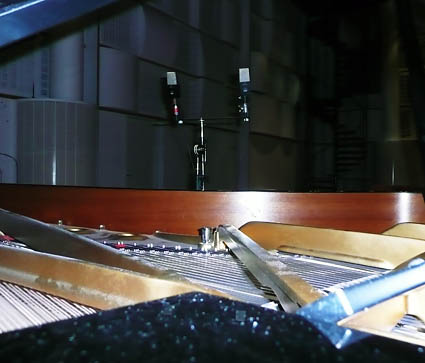 The very dusty piano above, is placed in the Radio House ... 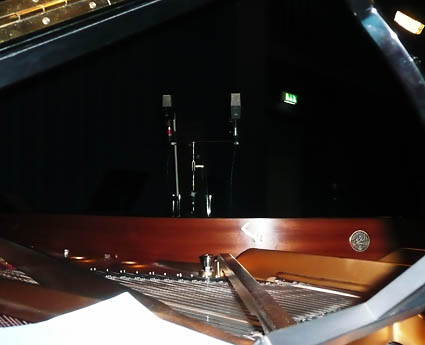 The difference of the placing of the mikes is under 1 centimeter
even if the recordings where made one and a half years apart in time.

The sound will we very uniform, it's very hard to hear a difference in the sound stage or quality.

This quickly gets very complex and you will soon lose control over your mike placement, as you are changing too many variables at the same time. Usually it's also very difficult to place the cardioid mikes exactly at a position where they have their flat response curve, and at the same time have the right balance between direct sound and first reflexes. This usually never happens and therefore renders the cardioids less functional for critical recordings. 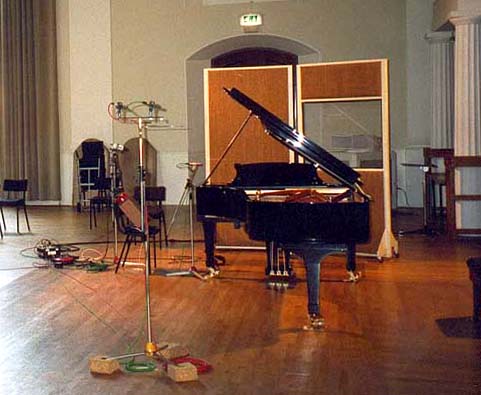 This is a stereo recording configuration at Hyperion's normal location at Henry Wood Hall in London, June 2003. Marc-André Hamelin is recording a Nikolai Kapustin CD. (Hyperion CDA67433). An excellent CD with rare piano music, by the way!

But the placement of the mikes far away from the instrument accounts for most of the problems heard on the CD. There are too many early and late reflections, and very little of direct sound. The result is an unclear sound, especially in the bass register. The unusual placement of the mikes adds unfortunately to the already dark sound picture. This sound quality is, in my opinion, a problem with many of the Hyperion CD's and, by the way, many recordings produced in England. Some of us here in Sweden call this phenomena: "the English sound". That means, unfortunately, an unclear and distant recording quality.

For me the most important aspect of a recording is not the actual sound quality but what is actually being played! Of course, I'm not against good sound quality. But unfortunately, good quality of sound is rarely in place at the same time as a great performance. The reason for this statement is simple: if the recording is unclear, you will miss a lot of information – actually parts of the music – that no system in the world can rescue. I always feel sorry for this common error on recordings, and it's probably based on a misunderstanding of recorded sound and the situation of listening to concert in a hall. The possible misunderstanding has to do with actual sound pressure in a live concert compared to domestic environments, and that mikes hear differently than our ears/brain at a given place. Our vision is also skewing the sonic information at a live concert.

Usually in a home listening environment you cannot obtain the same sound level as the instrument generates in the hall. A Steinway Concert Grand can produce about 110 dB. We have actually measured Piers Lane live at a concert in the Amorina Hall at 110 dB, two meters from the instrument. Very few loudspeakers and amplifiers – and neighbors – can produce (or stand) this sound pressure for prolonged periods. So most people have to, in their homes, listen at a lower level than the normal sound level in live conditions. This means that all areas of the sound over the speakers at home, must be extra clear and easy to focus on. Otherwise the music will not be able to come through properly – with "concert clarity" – at this "lower than live" level of sound.

Also, the mikes hear the sound quite differently than the ears. It's not possible to place the mikes at the best seat in the house, record and think that you will have a great recording. Such a recording will, in fact, be too distant and unclear. Our brain does not consider all sounds that the ears receive but the mikes take in all sounds, even the unwanted sound.

1. The placement of the mikes is too far away from the artist. Remember, as the mikes also will pick up the sound behind the mike, you have to get much closer than you would when recording with a cardioid mike to obtain the same amount of direct and reflected sound. If it's placed as an cardioid, the omnis will sound distant.

2. Do not place the omnis too far apart. As the sound is recorded with a time-difference method, the same sound will be recorded in both mikes but with a time difference. If the distance is too great, there will be audible phase cancellations in the recording. At greater distances these phase cancellations will affect the bass register which can be heard as an uneven bass response. The mikes should be placed about 28 cm from each other for small ensembles. For big ensembles like symphony orchestras one can use the Decca three as a picture further down on this page shows.

3. If you do sound evaluations, be very careful to set the levels of the different recordings, exactly the same at the listening sessions. They should be matched with a maximum difference of 0,1 dB, otherwise an proper evaluation cannot be made! You will usually prefer the stronger version. You can also use the F/E listening method, which is a blind test.

Two other ways to setup the mikes

Figure of eight mikes have an even stronger proximity effect than cardioids, but gives a very clear sound-stage. You can turn out recordings that have very little bass if you are not careful with the distance to the instruments. Less than 1 meter should be right for most mikes, a thing to remember if you like to use this type of mikes.

Recording a singer or speech

Look at the pictures of Susann Végh at the top of this page!

Let the singer sing in between two A-B mikes at an distance of an arm's length. In this way you will avoid the normally over-close recording of only the direct sound, and you will also catch the important first reflexes that are usually missing in most popular recordings. The over-riding benefit is that all sounds that create strong resonances and puff sounds in the mikes – like the letters p, t or s – are nearly completely avoided. You do not need any limiters or de-essers, because these sounds are no longer present in the recording. No more artifacts, just the sound of the singer. And furthermore, you do not need the thin protective cover in front of the mike. This physical filter will take away a bit of the treble of the recorded sound, and it's a good thing to get rid of it. If you would like to record the voice in mono, just change the stereo-spread from full right and left, to a center position of both mikes.

For talk, this is a great way of recording natural sounding voices. As the mikes are close, no phase cancellations will occur to create strange frequency responses or a bad stereo image. The voice contains very little of such low frequencies that can produce these effects. 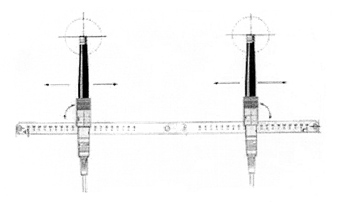 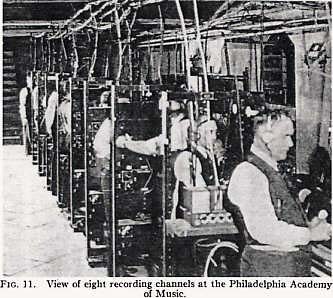 A truly historic picture from 1939 documenting the recording of the soundtrack to Disney's film Fantasia. That film had a lot of "first" events, among them "stereo-phonic" sound. Actually, it was 8 mono tracks recorded by these serious men. As stereo records became commercially viable in the late 1950's when the Lp came out, this experiment was really something spectacularly ahead of its time. Leopold Stokowsky was the very forward-looking conductor.

But this type of recording is not unfamiliar. What's common today in most modern pop-recordings is usually a blend of several mono sources that are connected together with the glue of reverberation. So there is usually no recorded room on many CD's.

I hope that this advice has given you some ideas on how to
make better – and clearer – recordings in the future.