Space considerations on the Internet do not permit longer explanations as found in a book. Information on the Internet is mostly picture-based. However, I want to stress that in designing a room or recording any instrument: if you use the unaltered direct sound and make strong first reflections appear in your design or recording, you will have an objectively truer and livelier impression of the sound quality. All of the truly great halls in the world – Musikverein in Vienna, the Tjajkovsky Hall in Moscow, to cite but two – will clearly show this claim is a fact.

It is very important to understand what part of the sound is essential and what is not. Obviously, you have to record the direct sound, but in most studios you do not record the first reflections. What is recorded is the direct sound and the “too early” first reflections (1-5 ms, sound that arrives after a travelling distance of 34 – 170 cm). Excessively close-miked recording also accentuates other problems; resonances and strong s-sounds, problems with consonants like the puff-sound from the letter p. This leads, in turn, to the overuse of limiters and compressors to remedy the recording. The result is that most pop-recordings have very restricted dynamic ranges and will as a result of that, sound unnatural. But you can get around nearly all of these problems by following some simple procedures. More about that later on.
What you should record is, in fact, the direct sound and the early reflections (5-20 ms for small ensembles and for big orchestras, 5-50 ms). If you would record too much of the early reflections (see the picture below), your recording will only appear to have more reverberation than it really has.
Note that the early reflections cannot be created in a good way in any reverberation insert or box, as these devices cannot create enough early reflections as needed to make the sound believable. If you add reverberation to your recordings – and most people do – you should add only late reflexes! Your insert or box should have the capability to add just these and no others. Note also that most inserts do not let you adjust this important thing! If you add early reflexes to your recording which already has early reflexes, the sound-image will fall back and the sound will be less clear. 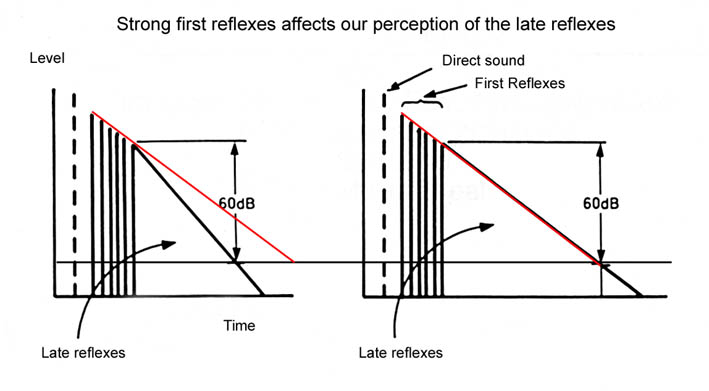 The “too early” first reflections that enter between 1-5 ms will make the sound unclear. So even if you place the mike too close, the simultaneous recording of the too early reflexes will counter-act the close placement of the mike! Not what you were trying to accomplish. Unfortunately, this is how the mike usually is placed in most pop studios around the world. I think it has to do with the live recording situation which is (incorrectly) transferred back to the studio. In a live situation with amplified music, you need to place the mike very close to any instrument for obvious reasons, but in a studio, you do not have to do this. A better way to place the mikes for a singer will be suggested in a following page, but first some thoughts about mike-types and the big confusion in this matter.

This is the frequency curve of a typical quality cardioid microphone, the Dpa 4015. You can clearly see that it has a resonance at about 15 kHz and that it only exhibits a straight frequency response in the bass register from about half a meter from the sound source! This may come as a surprise to many people who may think that any quality microphone would have a straight curve and not enhance or subdue any particular frequency over another. But this is not the case in real life. All cardioids have this typical performance characteristic!
The so-called "proximity effect" is defined as a bass increase when the microphone is placed nearer the subject than its specified distance. But what is not as well known is the fact that the microphone also gives less bass if used at a greater distance than the specifications. You can clearly see that this goes well up in the "easy to hear" area. In fact, it will have a big effect on the sound from about the middle of the piano, and that's half the instrument! If you, for any reason, believe that you cannot hear a change of 5–10 dB, you should see a doctor immediately!
So, if you adjust the microphones forward and backwards from your sound source – as any technician will do during a recording – you will also have an automatic adjustment of the frequency response that you normally do not wish to have.
Concerning the resonance and the added treble in the sound, it will be normally 3-5 dB and around 10 kHz for big membrane-mikes (1/2") and about 15 kHz for smaller membrane-mikes. The problem of closely place mikes for singers in the studio, the use of big membrane mikes, and the resonance of the mike at 10 kHz and the too strong s-sounds which closely match this area in the mike, is a nearly unsolved problem in most recordings. The resulting sound will be sticky and unpleasant sharp s-sounds.
Also, this typical (added) sound obtained from a cardioid mike is both very easy to hear once you have started to notice it and is also quite annoying.

Now, if you do not want this effect on the sound, is there anything you could do? Yes there is! You can use a pressure sensitive microphone – unfortunately not so commonly used – which functions as our ears and has normally a straight curve.

This is the Earthworks TC30 microphone. It has a nearly flat response (note the very stringent scale!). It also has such a small membrane that its resonance goes over into the ultra-sound register. This mike will make high demands on the microphone amplifier, as small membrane mikes have less output that a big membrane mike. The reason – a smaller membrane generates smaller physical movement that has to be amplified more. But the advantages outweigh the negatives. If you would start using this type of mike, you would probably not go back to the cardioid. But it takes some knowledge to use it correctly – it is not used in the same way as a cardioid – and on the next page we will discuss what other problems could arise.