Sweden and a Chamber music CD 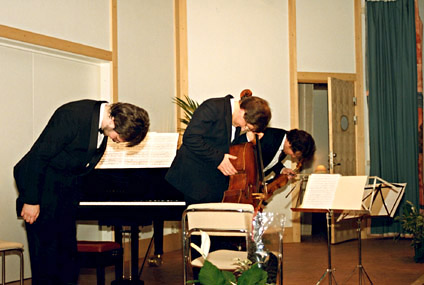 The picture is from a concert 1990 with the two concert-masters of the Swedish Radio Orchestra,
Bernt Lysell and Ola Karlsson. We played a couple of concerts with the Tjajkovsky trio and
Schubert B flat trio and of course, some sonatas. 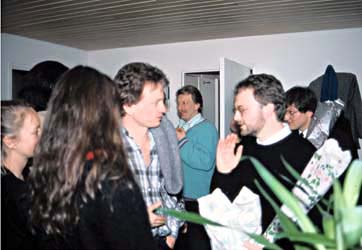 Talking after the concert, here with the well known composer Mikael Edlund. 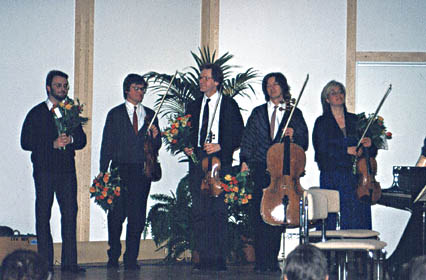 This is a picture from a 1987 concert with the prominent Berwald quartet.

I also have played solo, including some Rachmaninov Etudes tableaux in the Berwald hall programme,
in Stockholm 1986. There is a recording, but unfortunately no pictures from that occasion. 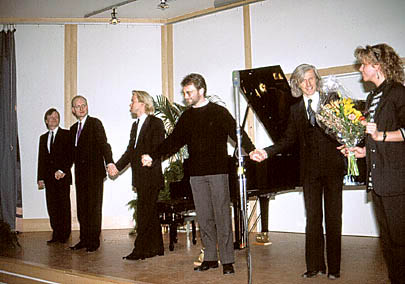 In 1988 there was an concert celebrating one of the most talented and also most forgotten piano geniuses,
Charles Valentine Alkan. Starting from the left, the pianists are: Stefan Lindgren, Bengt Forsberg,
Roland Pöntinen, myself and Lennart Wallin. The "flower girl" is my former student Helen Jönsson.

These two pictures are taken from a November 1994 CD recording session in the Amorina Hall. I made a chamber music CD which sold 3.000 copies. For chamber music that's a lot, as normally you do not even press more than 500 CDs and usually sell less than a 100 copies. The technicians are from Sound Art Studio. Note also the screens used in the hall to change the poor lateral reflection pattern in the Amorina Hall. http://www.soundart.se/records/ 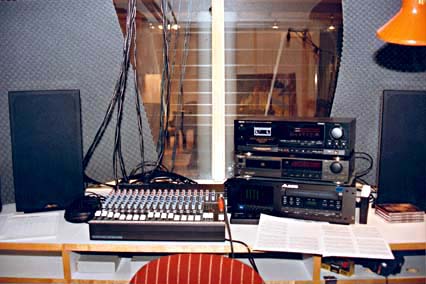 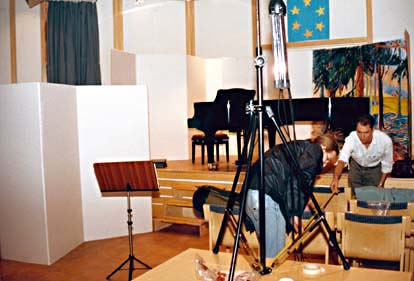 This is the actual frequency response in the hall. The green line represents response before changes are made in the hall. The red line shows response after some acoustics damping and reflection boards had been applied to even out the poor frequency response. It took more than two years to convince the people who built the hall that this was absolutely necessary to do. I learned during these two years, that few people, in reality, can hear and correctly judge an acoustic environment and at the same time make a valuable statement that will coincide with the actual measurements in the hall! 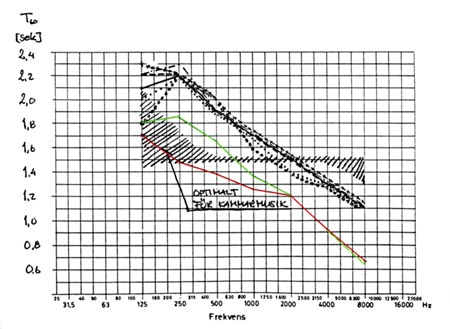 There are, of course, a lot of opinions about halls, but usually there is very little knowledge behind the opinions. Remember that giving opinions doesn't take any effort or knowledge. But valuable information both takes time and space to give, and demands knowledge, which takes time and effort to gain.

Unfortunately, there was absolutely no possibility of improving all that was wrong: the bad lateral reflexes of the hall, the back wall that was built at the wrong angle, the roof that took away too much volume, the acquisition of the wrong lighting system in which lamps sometimes rattle with the music, and the miscalculation of the bass damping effect of the roof. Just to change the frequency curve a bit was nearly too much to ask for. To make further improvements was an impossibility.

(There are actually several measurements of the response, if you look closely at the diagram. The red curve is the accurate curve of the hall, which has unfortunately very little response in the treble).

This is how the cover of the CD looks. First, its original cover, then the Biva version if you bought an Opel at the same time (really a very expensive way of buying the CD ;-)), and finally the edition sold at the residential study centre. 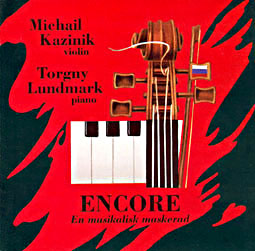 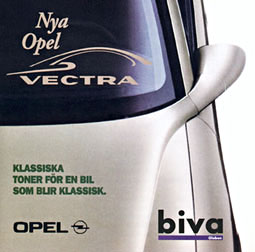 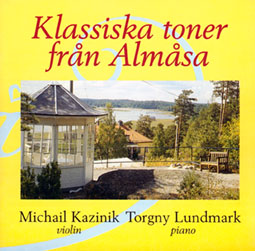 These are some pictures from concerts I gave in Bergslagen during 1983 – 1996. I and a friend asked some musicians from different orchestras in Stockholm, Gothenburg, Örebro and from other places in Sweden, to join for a tour each summer. As it was a small ensemble, we all had a chance to be star soloists with the orchestra. Over the years I have performed most of the Bach piano concertos many times and his 5th Brandenburg concerto more than twenty times with this ensemble. We played five to seven concerts each summer, many people came to listen to us and we had great fun. 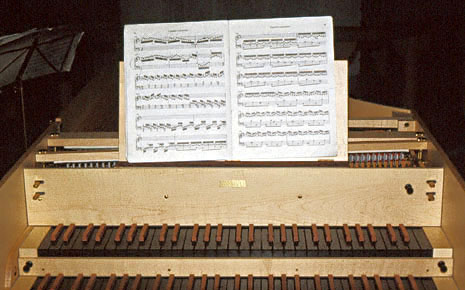 This is a picture of the big solo-cadenza from the score of the 5th Brandenburg concerto.
This piece was, in fact, the first cembalo (piano) concerto ever written. Very virtuosic,
great fun to play and most importantly, grand music that has withstood the ravages of time.

Lindesberg's church, one of the five to seven churches we gave concerts in during these years. 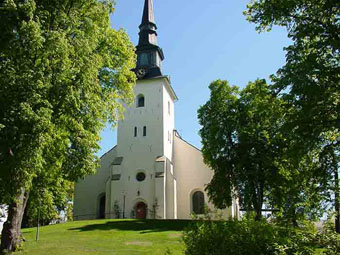 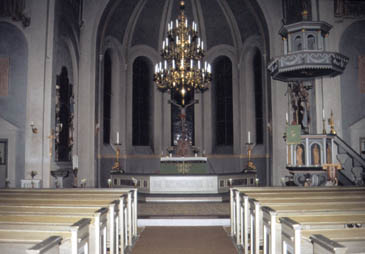