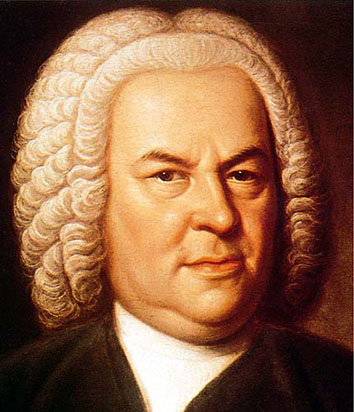 Johann Sebastian Bach was born to Johann Ambrosius and Maria Elisabeth Lämmerhirt Bach in Eisenach, Germany. Bach had two wives and twenty children, ten of whom lived to adulthood. He also somehow found time not only to compose well over two hundred hours of music, but also to write down the music and copy out parts for the performers. On top of that, he worked as a teacher and musician with far-reaching responsibilities.

At the age of almost ten Bach became an orphan. He went to live with his older brother, Johann Christoph Bach – an organist in Ohrdruf – where Bach learned a lot about organ playing from his brother but also from his own experience.

In 1703 he was appointed organist at Arnstadt, where he stayed until 1707, and thereafter he moved to Mühlhausen for another position as organist. On October 17 of 1707, he married his cousin Maria Barbara Bach. Pieces from Bach’s time at Mühlhausen include the great Toccata and Fugue in d minor for organ BWV 565. (BWV stands for Bach Werke-Verzeichnis, the index and standard means of numbering Bach’s works).

Regarding Bach’s life after this first period, it is customary to divide it into three parts.

The Weimar period (1708–1717). Bach was employed as a court organist in Weimar and wrote music mainly for the organ. He remained at Weimar until 1717.

The Anhalt-Cöthen period (1717–1729). Bach became music director (Kapellmeister) in the court of Prince Leopold of Anhalt-Cöthen. His duties consisted of providing chamber and other instrumental music for Prince Leopold, who was a great music lover and a bit of a musician himself. It was during this period that his first wife Maria Barbara died, while Bach was away, and was buried on July 7, 1720. Some time later Bach married Anna Magdalena Wilcken, on December 3, 1721. During his years in Cöthen, Bach wrote many keyboard pieces, some of them as teaching pieces for his growing family. The most famous were written directly for his eldest son, Wilhelm Friedemann Bach. There are 11 preludes in the Wilhelm Friedemann notebook that later were rewritten and expanded for inclusion in book I of the Well-Tempered Clavier. Book I was dated 1722 by Bach, when Wilhelm was twelve. On December 11, 1721, Prince Leopold remarried, and unfortunately his new wife was not interested at all in music. Bach had to move on.

The Leipzig period (1729–1750). Bach was employed as the Cantor and Music Director, but note not (!) as the organist of the St. Thomas Church in Leipzig. Bach wasn’t even the first choice for the council, only the third! This is not the first and only time in music history when incompetence decides! Bach was responsible for the music in five churches. He wrote a new cantata every week for the church service. We know that he wrote at least three more cantata cycles in addition to the 200 cantatas that have survived.

Besides composing weekly cantatas, Bach had to prepare choirs for performance and play the organ at services in the churches as well as for festivals and holidays. On top of all this, Bach had considerable responsibilities at the St. Thomas School, teaching singing, keyboard playing, instrumental music, composition, even Latin, as well as attending to a multitude of administrative duties. Bach still found time to write a lot of keyboard music in Leipzig, including the French Suites, the English Suites, and the Partitas.

Near the end of his life Bach went blind. Two operations could not save his vision and only weakened his general condition. He died quite unknown and poor. 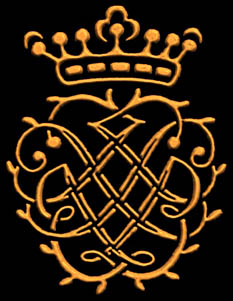 The well-Tempered Clavier is one of the landmarks of European music history. If you had to find the ten most important pieces of music ever written, it would easily fit in the top five.

The Well-Tempered Clavier is a collection of 96 pieces; actually, a collection of 48 pairs divided into two sets of 24, Book I and Book II. Bach finished Book I in 1722 and Book II in 1742. Each pair consists of a prelude and a fugue in all available keys. As the name implies, a prelude precedes a fugue. Aside from this, there are no rules or restrictions for its composition. On the other hand, a fugue must follow a certain set of rules, which serve to provide it with a skeleton or structure.

Bach was the first composer to write a complete collection of pieces in all possible keys. But, there were two predecessors. A work of Johann Caspar Ferdinand Fischer, the “Ariadne Musica Neo-Organoedum” of 1702 (first known edition 1715), uses 20 different tonalities. In 1719 Johann Mattheson published a complete thoroughbass treatise, “the Exemplarische Organisten Probe”. But, as the title says when it was republished and expanded in 1731, it was actually a “Grosse General-Bass-Schule” and not intended for performance.

Since the middle of the nineteenth century the WTC has achieved the status of a musical Bible. It would be very difficult to think of any major work of Western music that more fully fills a comparable function. WTC book I and II contains 96 character pieces in almost any thinkable style. Some pieces are sketches and jewelled miniatures, some are vast frescos, some are intimate and lyrical; some quiver with the intensity of a passion; some fringe on the pedantic; some are frankly sublime, and some are just plain virtuosic and very much fun to both listen to and to play.

The collection has without exception influenced all major composers throughout the centuries. Its miraculous inherent power has made it possible for the music to survive its own time and context, to adapt to changing interpretations, and to surmount all conceivable misinterpretations and all kinds of distortions. Moreover it has managed to adapt to our time. It appears that it’s not possible to kill the “inherent voice” in these pieces. It is, in the best sense, timeless music and can truly be called – after 283 years – immortal. During its first 79 years the collection circulated in hand copies. Its publication in 1801 contributed vastly to the Bach renaissance.

Books about The Well-Tempered Clavier 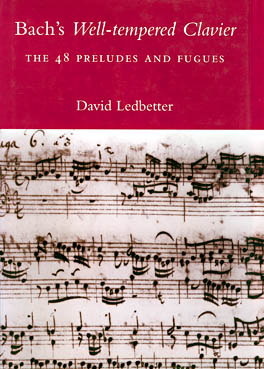 This book provides the most extensive information about the Well-Tempered Clavier.
It's a book for professionals or the very interested listener,
not quite the first book you would read about Bach and his music. 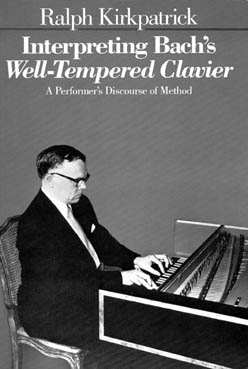 (Yale University Press 1984, 132 pages long. ISBN: 0-300-03893-3)
Kirkpatrick's book is a "performer's discourse of a method" in performing the WTC. It's very
carefully thought out and contains Kirkpatrick's idea of six aspects in performing the music:
the historical approach, the aesthetic approach, the melodic approach, the rhythmic approach,
the harmonic approach and the interpretative approach. It's actually six lectures given by Kirkpatrick
at Berkeley and Yale University in 1964. It's easy to read and well worth reading even if you are
not going to play the WTC. His ideas applies to all music.

Kirkpatrick's own recording of WTC book I, can be heard on DG Archive 463 601-2.
The instrument is rather unusual and is a clavichord. The recording was made in 1963. 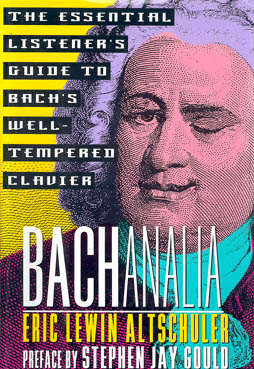 Eric Levin Altschuler's Listening guide to the WTC, is a more problematic book with its rather casual
language with a lot of amusing anecdotes. If you are new to listening to music or Bach WTC,
this book will give you a lot of inspiration and information to find a way into the music.
But I do not think that the book is aimed at the professional. 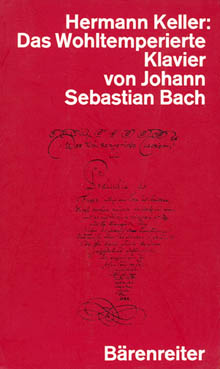 Herman Keller's book, is quite the opposite. Rather dry and technical. It's written in German. 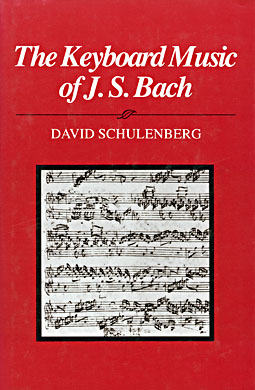 David Schulenberg's "The Keyboard Music of J. S. Bach" (Schirmer Books 1992, 475 pages long,
ISBN: 0-575-05518-9), should also be mentioned. It's very extensive and aimed
towards the professional or the very interested in Bach's Clavier music.

Besides the above-mentioned books, you can find in-depth analyses of the fugues at this Internet site: