During its 19 years – between 1986 and 2004 – and 90 concerts, attendance at Amorina Recitals averaged 255 persons per concert. No other chamber music series in Sweden can compete with that kind of attendance! The Amorina hall at Aniara-platsen in Sollentuna Centrum has been the scene for many memorable performances. In piano circles world class artists such as Roberto Szidon, Janina Fialkowska, Michael Habermann, Piers Lane, Marc-André Hamelin, Konstantin Scherbakov, Vladimir Ovtjinnikov, Stephen Coombs and Angela Hewitt, have made their Swedish or solo recitals debuts in Sollentuna. The concerts have been centered around the piano, as most chamber music works involve a piano part. Also, the nearly forgotten art of the piano recital has been a very important idea of Amorina Recitals.

On these Internet pages I will mostly concentrate on the international artists and pianists. But remember, there have been 142 different musicians playing at these concerts and many more instruments than piano have been represented! Most of the foremost Nordic music elite have appeared on the stage, even if these pages do not show them all. (There are so many pictures, photos, recordings ...) 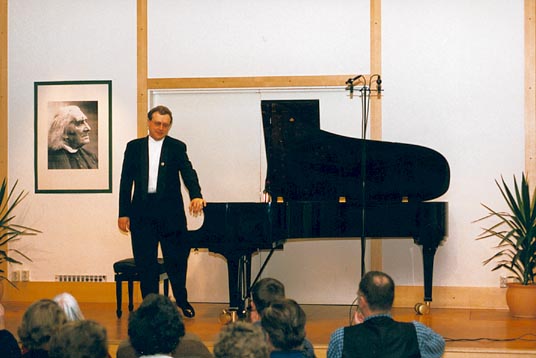 The picture is from Marc-André Hamelin's second concert (of five) in 1998.

Peter Johnson interviewed Marc-André in Stockholm 2001 after a concert in Amorina Recitals. Peter wrote in High Fidelity: "Marc-André Hamelin is the pianist’s pianist. The person who professionals goes to listen to in amazement. Hamelin plays everything, but particularly music that other struggle with and later abandon as unplayable."

Hamelin's recording of the Chopin–Godowsky Studies won the 2000 Gramophone Instrumental Award. He played some of them for us during his first visit to Stockholm in 1995.

In spring 2003 Swedish Television made a portrait of Marc-André Hamelin; an accolade rarely accorded to an overseas instrumentalist. Amorina Recitals was very active in the production mainly with the repertoire choice for the programme. My brother Jörgen and myself worked with the TV-producer Jonas Jannopoulos.

The Russian State Television RTR as well as the Swedish Television SVT, have made programs about Amorina Recitals. I arranged for RTR to visit Sweden in 1997 and during this trip they also filmed Astrid Lindgren (photo from that occasion on Tanja's page on this site), Bibi Andersson, Erland Josephson, the Cultural Minister and the headmaster of Edsberg’s Music Conservatory. Swedish Television made a portrait of the series in 1999, and as mentioned above, also made a special recital programme with Marc-André Hamelin during his visit in 2003. 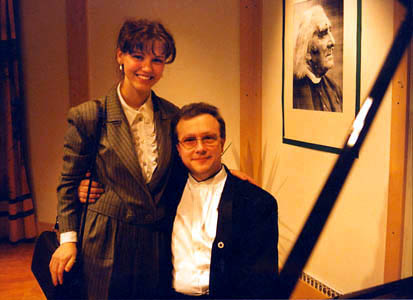 This is a picture of Marc-André Hamelin, with my wife Tanja, from his first visit in 1995.
His playing of some of the Chopin-Godowsky studies absolutely stunned the audience.
Notice the small Amorina pin. Marc-André carried this pin for many of his concerts in the late 1990s.
We are proud of this token of appreciation from Marc-André.

For many years, I produced radio programmes for Radio Stockholm in collaboration with the late journalist Sigvard Hammar. Unfortunately, today there is no classical music at all at Radio Stockholm. The Swedish Radio has also made studio recordings and recordings from the concerts, but when I also wanted the musicians to be paid for this extra work, they suddenly lost interest in the series. For years after that, the Swedish radio listener could tune in to Marc-André Hamelin’s concerts from Holland or even "attend" live concerts from Wigmore Hall in London. But from the Swedish horizon and Amorina Recitals with the same programme – silence! No wonder chamber music has problems today in Sweden, when the only radio station with classical music shows this little interest in visits by world class performers. Shame on you, radio P2! 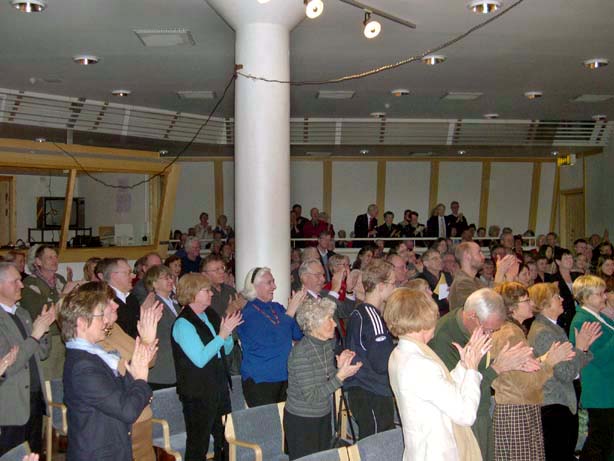 This picture above is from the last concert in March 2004, at which Leslie Howard
played a big programme for an enthusiastic audience.

Approximately 23.000 people have listened to the series 142 artists. In other words, the series created a total of 230 musicians jobs – as some artists came more than once – and were also quite well paid at that. There are too many classical music concert arrangers in Sweden paying very little: fees sufficient only for concerts with students, and often nothing at all! One of the main ideas of Amorina Recitals has been to give the artists decent pay.

Many times I’ve been asked the question: "why is it so important to attract a larger number of people to a concert?" For me, this has always been self-explanatory. If you don't have an audience, whom are you going to play for? At a concert with only 60 attendees, there will be no international artists especially if you can’t pay enough. Most importantly, you need an audience to get any kind of response from politicians. For Sweden, a usual chamber music concert gathers around 30-60 persons, and this is also true for the more well-known series. Before Amorina Recitals started, there had never been more than 108 people in the same hall. 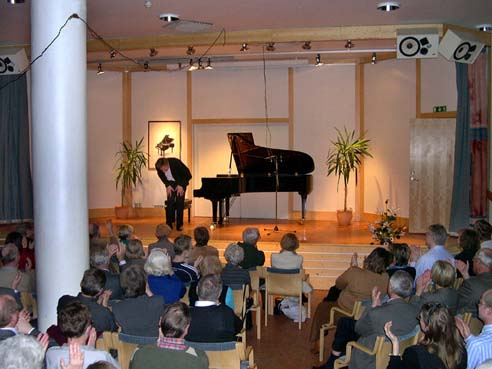 This picture of Leslie Howard 2004 illustrates the idea of adjusting the available
lighting and arranging flowers to give a positive warm atmosphere in the hall.

I could unfortunately do nothing to the obtrusive pillar in the center of the hall ... 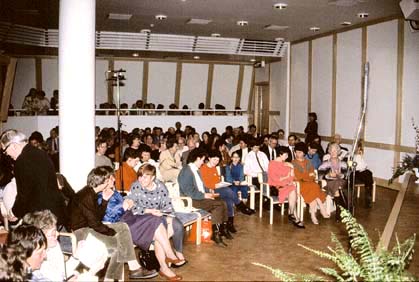 The audience at the very first concert in January 1986. 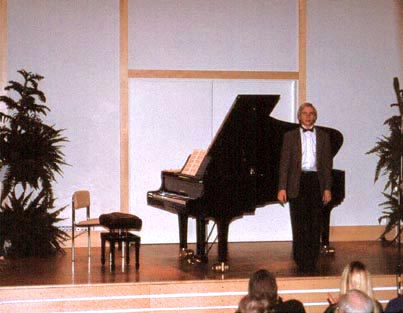 A very youthful Roland Pöntinen who was the artist
on this very special occasion in the history of Amorina Recitals.